I’ve been thinking about death more than usual lately; my father died just before Father’s Day a year ago, and so I remembered, then was constantly reminded again on that day. But there’s another death that’s recently happened that really bothers me. The Internet is a really strange place.

A few days ago, I was reading Twitter as I often do, and I saw a tweet that mentioned a death. I don’t remember which one it was, specifically, but I didn’t think a whole lot of it: death happens all the time, and this one referred to an accident. It basically just said something like “Whoah, Michael, it was way too soon to lose you. :(” I didn’t think much of it, but a few minutes later, I saw a few more tweets: “@mmhastings, amazing reporter, what a great guy, how tragic.” If a few of my followers all knew this dude, then he must be a good guy. So I clicked through to his Twitter profile: 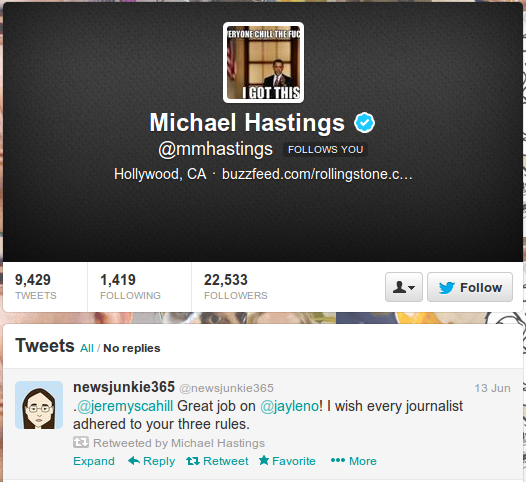 Here’s what I noticed:

As the day went on, more and more articles came out, and I read them all. Apparently, Michael Hastings was a really awesome guy. Apparently he was one of the few real reporters, the ones who dig in deep, aren’t afraid to speak about what they find, and never backed down. The story about his death in Rolling Stone says “Hastings’ hallmark as reporter was his refusal to cozy up to power.”

So here’s what weirds me out about this situation:

First of all, wow, life is short. At any given time, if I just got hit by a car and died, I probably wouldn’t be all that proud of my last tweet. Isn’t it weird, that when someone’s life gets cut short, we can see what they were up to right before their death? I can now read the words of a man I’d never spoken to, and see what he was up to and what he cared about. This isn’t new news, there’s even a 4chan meme (from back in the early days of /b/) about a kid who committed suicide and all of his friends writing eulogies on his MySpace page. This is one of the first times it’s (in)directly affected me, though, and so it’s taken on a different tone.

Second, why didn’t I know who this was? Apparently this was a man who was a really great person, the kind I would have liked. And apparently he saw enough value in my random ramblings on Twitter to pay attention to me. But why didn’t I reciprocate? We lived in the same place. It wouldn’t have been hard to go grab a beer sometime. I walked past the intersection that he died many, many times. Would I have been friends with this person in some alternate universe?

One of the things that I always said about my father’s death was that at least he had two months where he knew he was going to die. While it was an incredible stress on everyone involved, at least he was able to say everything to everyone he wanted to say something to, wrap up all his unfinished business, and make peace with the God he deeply believed in. Sudden deaths have their own entire element of terrible, where you don’t get that chance. I mean, I’ve been thinking about this situation basically nonstop for the last few days, and I didn’t even really know this person: I can’t imagine how horribly tragic this is for all of the people who were actually close to Michael. I saw what a toll my father’s death took on my mother, I can’t even imagine the grief his wife must be dealing with right now.

So many questions. So few answers. So sad. All we can do is look at these digital remnants, wonder, and remember.

Today is the last day of my 29th year of existence. I’ve been thinking about it a lot, which is extra strange because I don’t generally care about birthdays. I’m not much of one for holidays in general. So why do I care about this one?... Continue →